From the school of experience…

Robert Brown just smiles when asked why he and partner Sue Carruthers, seemingly content to enjoy a life of semi-retirement after several years in the restaurant business, would even think about stepping back into the kitchen on a full-time basis.

Brown and Carruthers own and operate Tamarind House in Tupapa. In 2003, they bought the lease for the landmark colonial house that was once the manager’s residence for the Union Steamship Company, and transformed it into an upscale eatery that opened for business in 2004. 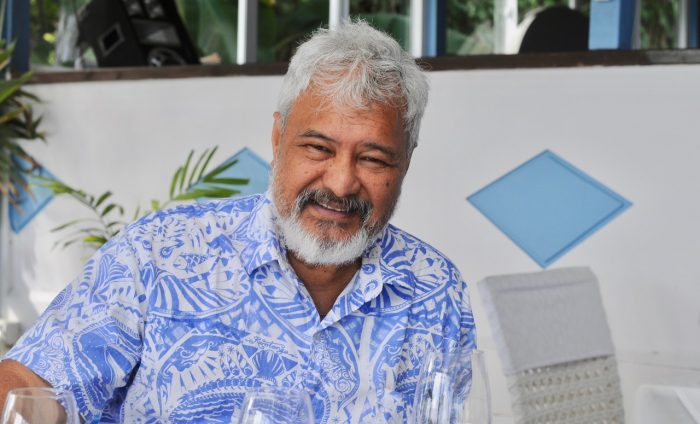 “We wanted it to be up-market, with a sort of romantic, South Pacific feel to it,” says Carruthers of the renovations that included extending the verandas on the front and sides of the house. “A sort of Twenties or Thirties’ feel to it, where people dress up.

“The couple knew a thing or two about running a successful business, having built their reputations as a dynamic duo at the Flame Tree. They sold that restaurant in 2000 and retreated from the hectic life that is part and parcel of feeding the hungry masses on a daily basis.

While Carruthers cultivated a botanical garden, Brown kept his cooking skills sharp by operating the Ambala Garden Cafe on their private property. But the idea of working limited hours, while ideal in theory, proved daunting in reality.

“You’re open one night a week, what do you do with your leftovers?” Brown asks. “We were throwing food away. It didn’t work out, so we sort of pushed it aside, thinking we’d eventually get back into something bigger than that.

“It was the idea of coming to work each day in a historical building on a secluded beach that eventually proved too enticing to resist. Brown says it came down to finally admitting they couldn’t stay away from the restaurant business.

“We’ve just found that’s what we’re good at,” he says. “When you find what you’re good at, you stick with it.”

A new business also resulted in new duties. While Carruthers was a force of nature in the Flame Tree kitchen – leaving Brown to patrol front-of-house – it’s Brown who has donned the chef’s apron at Tamarind House.

“Sue got tired of cooking;” says Brown. “So we sort of changed roles.”

Brown didn’t attend a culinary institute with a fancy French name – he accumulated his expertise at the School of Experience.

“I’ve been in the restaurant for so many years, watching the chefs who worked for us,” he says. “And, of course, living with Sue, I learned just from that.”

Unlike other chefs, Brown wasn’t helping in the family kitchen from the time he could walk.

“We weren’t allowed in the kitchen,” he says. “Our parents always did the cooking. It wasn’t the place for kids when I was growing up.”

It was only later, while employed in a relative’s cafe, that Brown had his first taste of his future vocation.

“You start off peeling potatoes and a bit of washing up, and then you get to cook something,” he says of his younger self. “I enjoyed it and, from there, I was cooking all the time. Working in restaurants, you develop a taste for food. And then, when I met Sue, it changed to better food, quality food.”

The Flame Tree may have shifted further down their CVs but there are still echoes of that iconic eatery at Tamarind House.

“When we came here, we still had the Flame Tree in mind, but we just wanted to do something a bit more exciting, a bit different,” says Brown. “There are four dishes that we brought along with us. Some we changed a bit, but there are a lot of new ones as well.”

Also new is the music provided by pianists Garth Young and Rudy Aquino.”We wanted romantic music to create an ambience,” says Carruthers. “We like that nice, soft background music. And people like that it’s live.”

Ask what they’d recommend from the menu and Brown and Carruthers do that aww-thing that marks them as a couple by choosing each other’s dishes. Brown, it’s revealed, makes a seafood platter that “people say is the best they’ve ever had”. For her part, Carruthers has designed a vegetarian lasagne that has proven immensely popular.

“It actually tastes like there’s meat in it,” Brown says.

Location can sometimes make or break a restaurant. Brown appreciates being close to town when he needs to stock up on supplies, while Carruthers explains how having a 2–acre property on a prime beach has allowed them to supplement their income by hosting weddings and receptions.”

If you want a private venue for your function, we’ve got it,” she says. “You’re not sharing this area with hotel guests. I think it’s the best spot on the island for a private wedding.”

Sue Carruthers spent several years assuring friends and fans alike that she was working on her next cookbook.

Seventeen years, to be precise.

South Seas Cuisine will be launched this weekend, with copies available at such locations as Bounty Books and Tamarind House, the Tupapa restaurant Carruthers owns and operates with her partner, Robert Brown, and where The Times sat down with the couple on a recent dreary afternoon.” 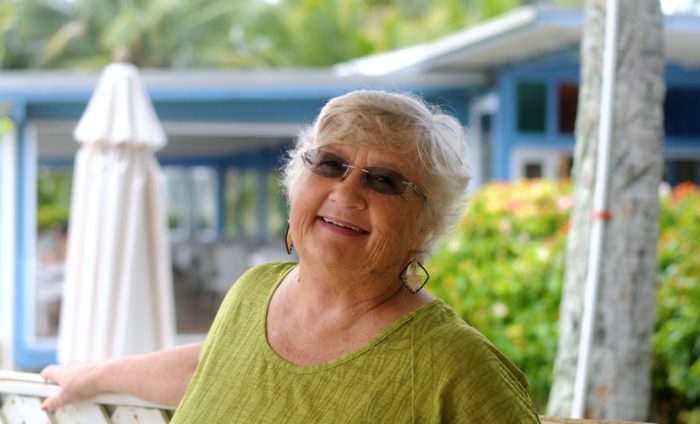 All these years people have been asking when I’m going to bring out the next book (after The Tropical Garden Cookbook),” says Carruthers. “It got to the point where I was sending recipes all over the world and I thought, why we don’t just get all of this done in a book.”

While she bided her time, collecting and testing and tweaking recipes, Carruthers also made plans to give her second solo effort a more practical design.

“The idea was that it would be affordable and lighter for people to carry,” she says. “My other book is quite a big book – 260-odd pages – and it’s fairly heavy. This new one is A5 and 140 pages or so. The idea is that it would be a very much easier for visitors to take back to their country of origin, while also making it more affordable for people living on the island.”

The cookbook, brimming with dishes both savoury and sweet, will appeal to a broad range of cooks.

“I tried to make this one useful for the Outer Islands as well as yachtsmen,” says Carruthers. “So it would be suitable for cafes, restaurants and the home cook. It’s all to do with local ingredients, as much as possible. I tried not to use many imported ingredients at all. So, if we had a siege here, we’d get by.”

She says the inspiration for the recipes derived from several sources, including the fact she and Brown are keen travellers.

“I’ve spent a lot of time sailing, a lot of time in the Caribbean and, obviously, I’ve lived in the tropics all my life,” Carruthers says. “It’s old family recipes, some of them. Others have just been accumulated. Some are ones we’ve invented, just coming up with ideas on how to use the local produce because, obviously, imported goods are very, very expensive.”

Carruthers says she has no problem with sharing her recipes, even if some of them do lie at the heart of Tamarind House’s ongoing popularity.

“I think, at the end of the day, people are going to be asking you for recipes anyway,” she says. “Some people say, why do that, because other people will cook what you’re cooking, but it’s not actually that damaging to have them doing that. Most people would still rather come eat in your restaurant.”

The other thing about producing the recipes, Carruthers says, is that she is also creating them with the restaurant’s staff in mind. “Everything that we invent or adapt or come up with, we are actually putting that recipe into the kitchen and writing for the staff to be able to follow,” she says.

But, Carruthers explains, South Seas Cuisine is not all about Tamarind House.

“Some of it is more sort of home-kitchen kind of food, which is good,” she says. “I think there is definitely a market for that because not everybody wants to cook like a restaurateur.”

Reprinted with permission from The Cook Islands Herald, Online Edition

Celebrating Australia with our #2coursemeal #speci

yes we are open for lunch today, we have our Taste 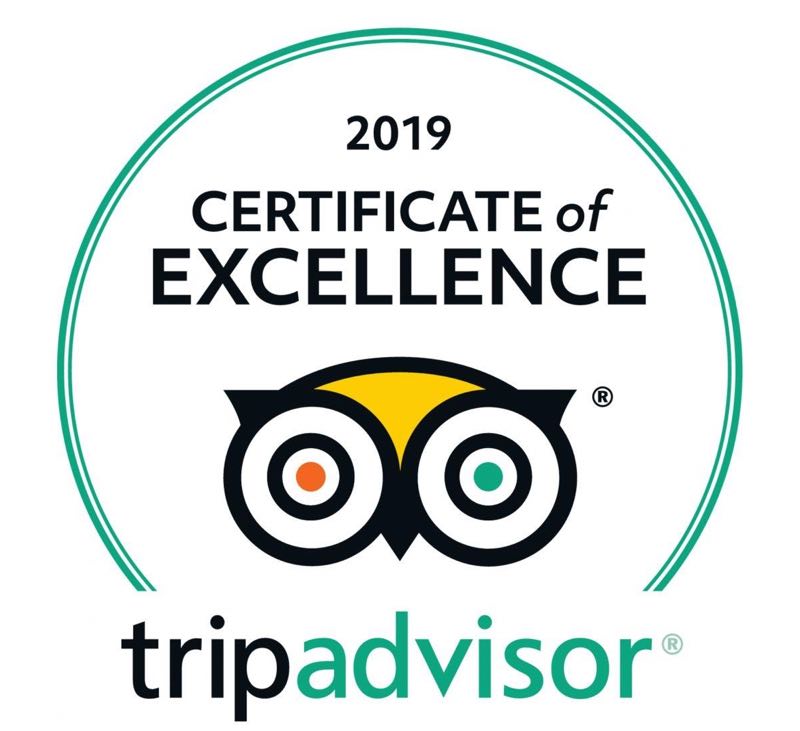 Celebrating Australia with our #2coursemeal #speci

yes we are open for lunch today, we have our Taste